EPIM Policy Updates are developed as a resource for organisations interested in European policy developments in the area of migration and integration. The European Policy Centre (EPC), a Brussels-based think tank, has been commissioned to produce these Policy Updates, which are released five times a year. 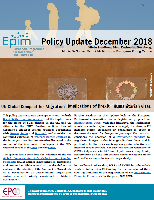 This edition’s special focus covers the UN Global Compact for Migration, which was adopted in December amidst disinformation campaigns and contention. Other key highlights of this Policy Update include: